What amateur culture was in 1906 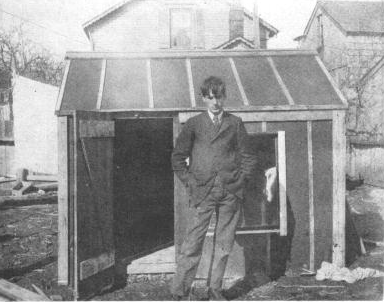 The best teaching case in the very beginning of amateur culture, because it’s so well documented in QST, is that of Irving Vermilya, in Mount Vernon, New York. I’ve done some posts about this fascinating kid and his circle already. Between 1903 and 1910 he was part of a rowdy and growing cell of experimenters across town, several dozen teen scroungers who communicated illegally with each other by backyard telegraph (they purloined the power from the city tram) and made life hell for commercial and military interests on the air, where they attracted the attention of the Department of the Navy. (When they were bored, the kids liked to jam the fleet in Brooklyn.) The navy, for reasons I’ve never understood, was the arm of the government generally charged with management of wireless communications at the federal level. (This endured all the way to World War 2.) A number of these Mount Vernon kids grew up and got jobs in wireless, and Irving Vermilya was one of them.

Exactly the same scrabble between tinkerers, syndicates, and a generally befuddled Uncle Sam was happening in other cities at the very same time, and exactly the same slow move to eventual citizenly resolution. In 1906 Technical World Magazine reported on a dozen high schoolers in Newport, Rhode Island, who had come under inspection by one Commander Albert Gleaves, USN, for having caused some serious problems for a nearby torpedo installation. The nucleus of the kids’ organization was a homebrew transmitter in a converted henhouse. The Commander came away blinking, telling Washington that these kids were really very ingenious, and that their example proves that anyone can get on the air, cheaply, and that the army and navy should take note of this and do it too. In the free-for-all world of 1906 it wasn’t clear whether a reprimand or a commendation was actually in order.

Two of these Newport Irving Vermilyas were Charles Fielding, a telegraph messenger, and his pal Lloyd Manuel, he of the henhouse. They were not especially interested in matriculating into commercial wireless, at least for very long. They wanted to make fortunes as wireless inventors. Their families could ill afford to spend money for whims, as Technical World politely put it, which might explain the boys’ ambition.

It probably does explain their ingenuity. They made spark gaps out of old nails. They wound their coils on jars and curtain rollers. They made detectors out of arc-light carbons and sewing needles, or, emulating Fessenden, from incandescent lamps that they filled with nitric acid.

I do find Lloyd Manuel possessed of a 500-watt station in 1924, at 169 Thames Street, Newport, a modest address, under callsign 1BOG.  He stayed on course, by the look of it, and went legitimate, even if he didn’t make a fortune.  No mention of Charles Fielding.